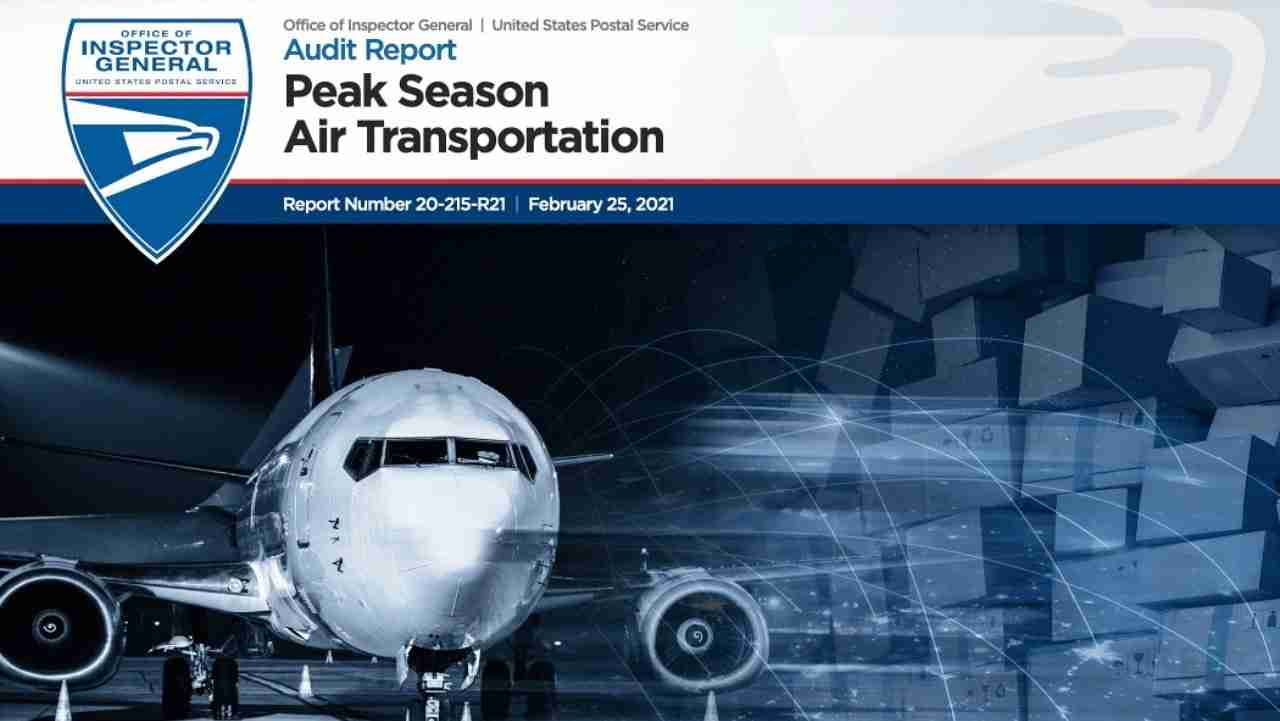 Our objective was to assess the Postal Service’s efforts to reduce Peak Season air transportation operational costs while maintaining service during fiscal year (FY) 2019 and FY 2020.

The Postal Service’s Peak Season lasts about eight weeks, starting on or around Thanksgiving Day in November and ending on or around Martin Luther King, Jr. Day in January. Since FY 2018, the average cost of the Postal Service’s air network per day during Peak Season increased from $8.7 million to $9.8 million (12.6 percent increase). The highest Peak Season average volume per day was [redacted] million pounds in FY 2019. Despite less volume during the FY 2020 Peak Season (November 28, 2019 – January 20, 2020), the cost per pound to transport mail by air continued to rise – from [redacted] in FY 2018 to [redacted] in FY 2020 (10.9 percent increase).

The Postal Service’s air transportation during Peak Season primarily consisted of four networks: FedEx, UPS, commercial airline (CAIR) carriers, and peak charters. About six months in advance of Peak Season, the modeling team forecasts mail volume and runs an allocation model that produces the least costly allocation of mail amongst the carriers. Subsequently, the operations team requests the anticipated airlift in each market from the carriers. The modeling team identifies capacity issues by running the allocation model again with the updated capacity about a month in advance of needing the airlift. When there is more anticipated volume than available lift, the operations team contracts for charter flights.

Though the Postal Service is bound to the airlift it purchases, all planning of mail allocation up until this point is a projection. The originating and destinating air stops are created by the modeling team within two weeks of the operational day of flight and the assignment of the mail to specific carriers occurs on the operational day of flight. The operations team executes the plan, assigning the mail that materializes to the available carriers and is also responsible for mitigating any unforeseen changes, such as weather delays, to the plan.

While operations throughout the year follow a steady allocation of mail, operations during the Postal Service’s Peak Season operate much differently. For example, some carriers change their pricing and volume minimums and maximums during Peak Season. Specifically, [redacted] is bound to provide an additional 20 percent increase in airlift and the Postal Service contracts for additional Peak Season-specific charters for high volume markets. Additionally, the Postal Service relaxes Priority Mail service standards by an extra day so more mail can travel on surface transportation instead of by air.

Our audit fieldwork started after the president of the U.S. issued the national emergency declaration concerning the novel coronavirus disease outbreak (COVID-19) on March 13, 2020. The results of this audit do not reflect any process and/or operational changes that may have occurred as a result of the pandemic.

We found the Postal Service did not accurately forecast Peak Season mail volume, which caused a variance between forecasted and actual mail volumes during FYs 2019 and 2020 Peak Seasons. Specifically, an average of 83 percent of the forecasted mail volumes per air lane (a pair of originating and destinating air stops), date, and mail class were inaccurate by 10 percent or more compared to the actual volume that materialized.

The forecast and subsequent allocation do not directly impact mail assignment because the operations team deploys mitigation methods to account for the actual volume materializing across the network. However, the decisions made

before mail assignment could lead to over- or under-buying necessary airlift. For example, if the modeling team under-forecasted mail volume then the operations team might need to request an impromptu charter.

When the mail volume was under the anticipated amount, the Postal Service could divert volume from CAIR to ensure the capacity minimums required under other carrier contracts were met. However, the actual impact cannot be calculated because the Postal Service does not maintain records of its reasoning for shifting volume from one carrier to another during mail assignment.

The modeling team did not accurately forecast Peak Season mail volume, in part, because it did not effectively communicate with the sales team to assess and project volume trends. The modeling team occasionally received operational information when new mailers were opening in a market, but the modeling team did not communicate with the sales team about anticipated market changes during FYs 2019 and 2020 Peak Seasons. When forecasted mail volume is inaccurate, the Postal Service is at risk of having excess or deficient airlift to support operations.

We also found that the modeling team did not adjust its planning to account for operational changes applicable to Peak Season. Specifically, the modeling team did not measure its use of the [redacted] network throughout the year to calculate the contractually obligated increase in available capacity during Peak Season. [Redacted] is bound to provide 20 percent more than the Postal Service’s average usage during non-peak season. In FYs 2019 and 2020 Peak Seasons, the Postal Service exceeded [redacted] Peak Season capacity on 55 percent of the days (33 of 60 days in [redacted] peak operational periods).