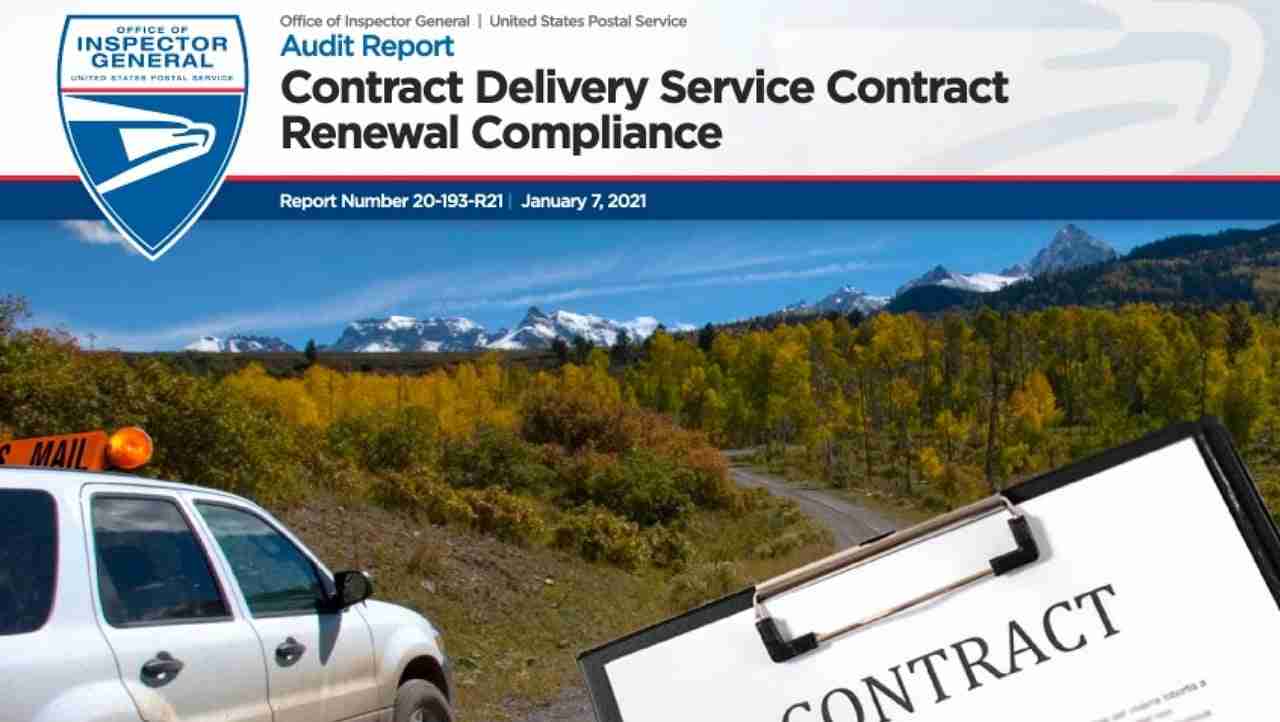 Our objective was to evaluate the Contract Delivery Service (CDS) renewal process for compliance with Postal Service policies and procedures. Our scope included all CDS contract renewals for fiscal years (FY) 2018 and 2019.

The Postal Service has statutory authority to contract for surface mail transportation services from any carrier or person carried out via Highway Contract Routes, which include transporting mail and CDS routes. CDS routes are contract agreements between the Postal Service and private individuals or firms to deliver and collect mail nationwide.

While the CDS Office has an established contract renewal process, it did not renew CDS contracts in accordance with Postal Service policies and procedures for contract renewals. Based on our statistical sample of FY 2018 and 2019 renewed contracts valued at about $9.9 million, 137 of 173 (79 percent) renewed contracts in the Transportation Contract Support System (TCSS) did not always assess supplier past performance or ensure that background screening documents for supplier eligibility were completed.

We identified 106 of 173 (61 percent) contract renewals that did not have evidence of supplier performance in TCSS. This occurred because administrative officers did not always complete the CDS supplier performance assessment or report supplier deficiencies to contracting officers.

Additionally, contracting officers did not always perform due diligence to ensure suppliers were in good standing before renewing the contract. For example, contracting officers assumed performance was satisfactory and proceeded with the renewal regardless of whether they received supplier performance input from administrative officers. Without obtaining assessments of supplier performance, the Postal Service brand and quality of delivery service could be negatively affected by renewing with a supplier providing less than satisfactory service.

We also found 78 of 173 contracts (45 percent) had incomplete or missing supplier screening documents in the TCSS. This included failure to answer all background screening questions and provide screening confirmation for employees with access to the mail. We identified 90 of 173 (52 percent) CDS suppliers had expired non-sensitive clearances. This occurred because management did not have sufficient controls, such as procedures for tracking and monitoring clearances to ensure that CDS suppliers were obtaining security clearances.

In a previous OIG report, we recommended the Postal Service establish formal procedures to track and monitor contract driver security clearances to ensure drivers have the appropriate clearance and are re-screened. We also recommended the Postal Service establish a centralized system that allows for the tracking and monitoring of contract drivers security clearances.