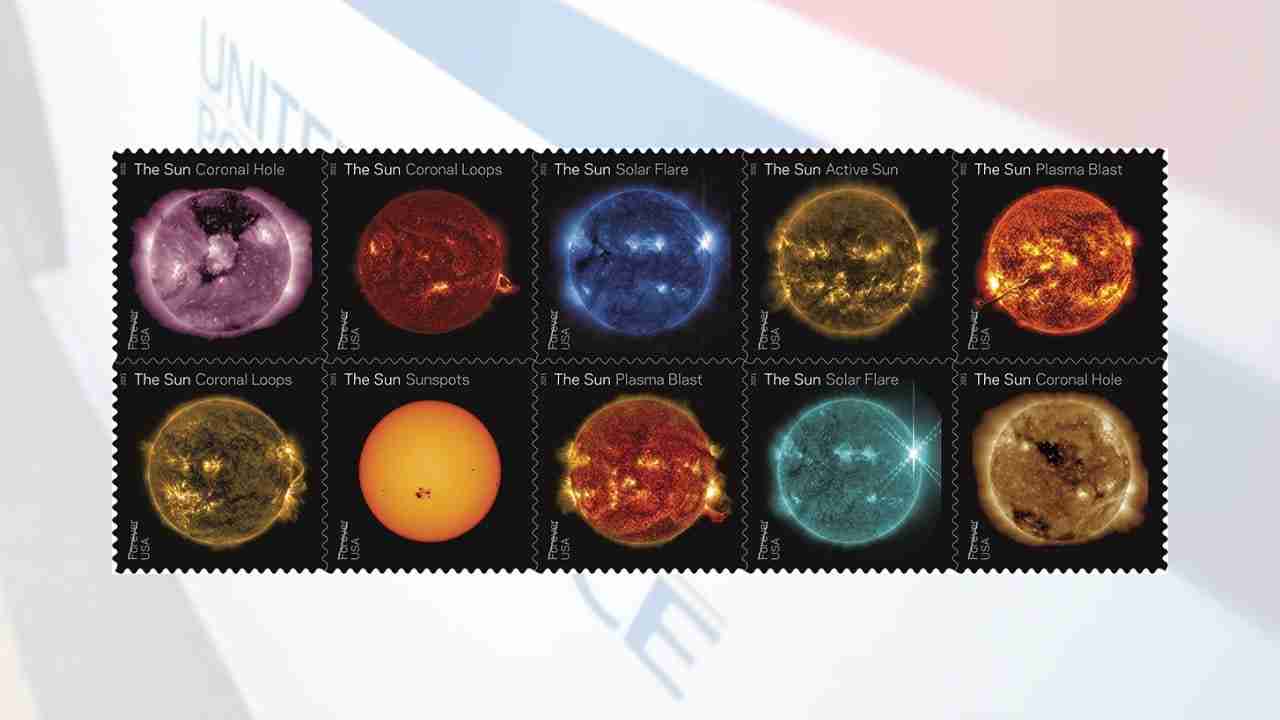 GREENBELT, MD — The U.S. Postal Service issued the Sun Science stamps today. The Forever stamps were dedicated during a ceremony at the Greenbelt Main Post Office and are now for sale at Post Offices nationwide. News of the stamps is being shared with the hashtags #NASASunScience and #SunSciencestamps.

“We hope these amazing stamps will help generate the same sense of wonder and curiosity about our star that inspired our ancestors and the scientists at NASA to want to better understand the sun, space, and the myriad of possibilities that exist in our solar system, in our universe and beyond,” said Thomas J. Marshall, the Postal Service’s general counsel and executive vice president, and the stamp ceremony’s dedicating official.

The Postal Service highlights stunning images of the sun that celebrate the science behind the ongoing exploration of our nearest star.

Printed with a foil treatment that adds a glimmer to the stamps, the images on these stamps come from NASA’s Solar Dynamics Observatory, a spacecraft launched in February 2010 to keep a constant watch on the sun from geosynchronous orbit above Earth. The striking colors in these images do not represent the actual colors of the sun as perceived by human eyesight. Instead, each image is colorized by NASA according to different wavelengths that reveal or highlight specific features of the sun’s activity.

One of the stamps highlights sunspots, two feature images of coronal holes, two show coronal loops, two depict plasma blasts, one is a view of an active sun that emphasizes its magnetic fields, and two show different views of a solar flare.

Heliophysics, the study of the sun and its influence on the planets and space surrounding them, has important implications for our day-to-day lives. Although the space between the sun and Earth appears empty to human eyes, it is actually full of particles and energy from the constant flow of solar wind emitted by the sun. That space is affected by a complex, ever-changing magnetic field that influences our entire solar system. Increased understanding of the sun helps us better explain and predict its impact not only on Earth’s climate but also on the near-Earth space environment and how it affects sensitive human technology, such as communications systems and satellite electronics. As humanity continues to explore space, a deeper knowledge of solar activity will also make it possible to identify and solve problems involved in communications, data collection, spacecraft and satellite design, and the effects of space radiation on the human body.

Art director Antonio Alcalá designed the stamps from photos that have been colorized by NASA to correspond with the wavelengths that reveal specific features of the sun’s activity.

A video about the stamps is available on facebook.com/usps. A pictorial postmark of the designated first-day-of-issue city, Greenbelt, MD, is available at usps.com/shopstamps.

The Sun Science stamps are being issued as a Forever stamp in panes of 20. These Forever stamps will always be equal in value to the current First-Class Mail 1‑ounce price.

Customers may purchase stamps and other philatelic products through the Postal Store at usps.com/shopstamps, by calling 844-737-7826, by mail through USA Philatelic, or at Post Office locations nationwide.