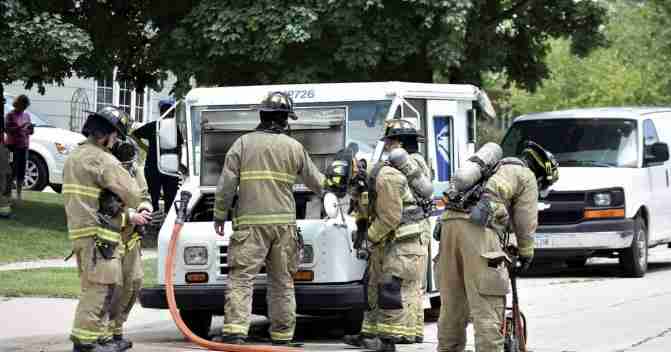 Fort Dodge firefighters quickly responded to a report of a USPS mail truck on fire in the 1300 block of 28th Avenue North early Friday afternoon. An apparent fault with wiring under the hood caused smoke to come from the compartment. Firefighter Ben Waynar said the source of the smoke was quickly extinguished, using about 30 gallons of water.

USPS mailman Darron Baker chats with firefighters as they finish evaluating his truck that started smoking as he returned from delivering a package in the 1300 block of 28th Avenue North. Mail in the back of the truck was quickly evacuated out of harm’s way early Friday afternoon. After 37 years of service with the USPS, Baker said it wasn’t the most exciting thing that had happened to him, but was perhaps “the most irritating.”