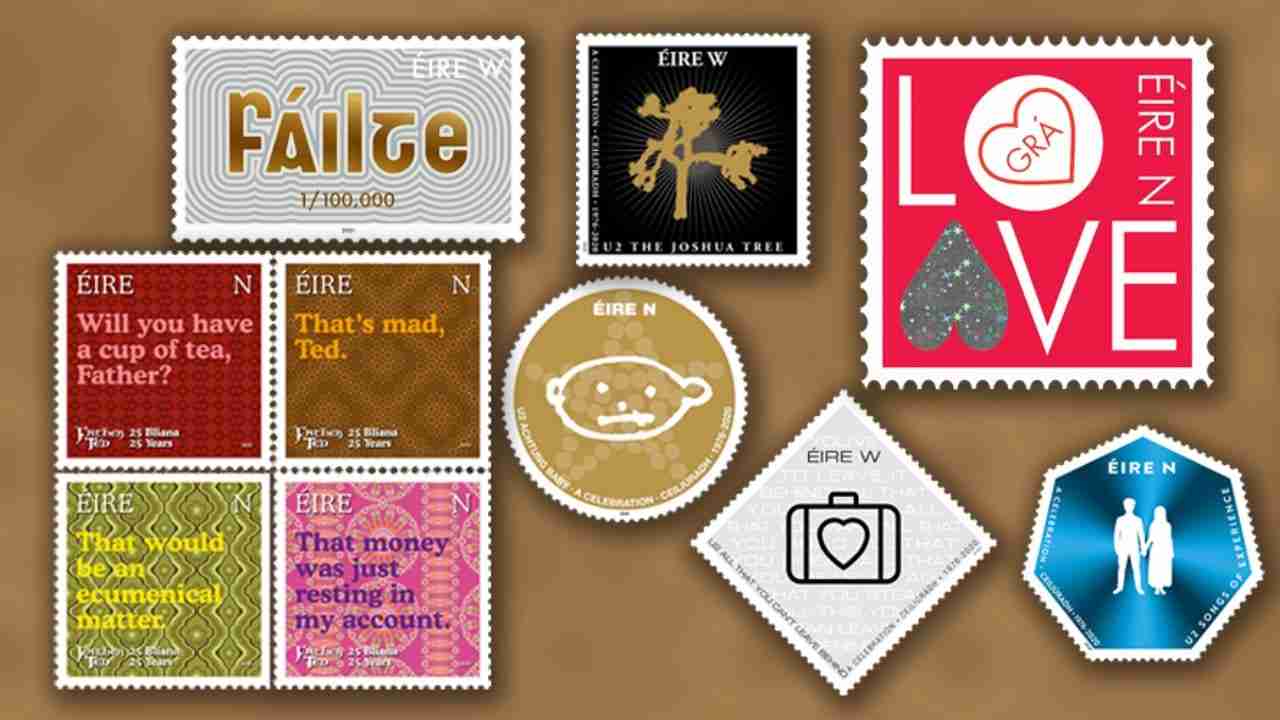 In a tip of the hat to St. Pat, here are five recent stamps released by An Post, Ireland’s postal service. Some of them may surprise you:

1. Failte. Ireland’s newest stamp bears the greeting “failte,” Gaelic for “welcome,” with wavy light gray lines radiating from the greeting to form the background. The fraction “1/100,000” is lightly inked below, a play on the Gaelic “cead mile failte,” or “one hundred thousand welcomes.” Tourism is a significant part of Ireland’s economy — more than 10.8 million traveled overseas to visit the Emerald Isle in 2019 — so it’s fitting that the stamp is used for international mail.

2. U2. The famous Irish rock quartet has its own quartet of commemoratives. Each of the four stamps reflects an era in the band’s history as represented by an album of the time: “The Joshua Tree” (1987), “Achtung Baby” (1991), “All That You Can’t Leave Behind” (2000) and “Songs of Experience” (2017). The stamps were designed by Shaughn McGrath Creative with input from the band and its creative director and were released Oct. 15, which may have been a nod to the band’s second album, “October.”

3. “Father Ted.” To mark the 25th anniversary of the Irish sitcom, An Post released a set of four stamps, each with a quote from one of the show’s four main characters. The August commemoratives broke all sales records and created a backlog; An Post said it had received two months’ worth of orders in two days. The quotes on the stamp are “That’s mad, Ted,” “That would be an ecumenical matter,” “That money was just resting in my account,” and “Will you have a cup of tea, Father?”

4. Irish Rugby. The sport has become increasingly popular in Ireland due in no small part to the national men’s team’s exceptional standing worldwide. This two-stamp set honors coach Joe Schmidt, 2018 World Rugby Coach of the Year, and out-half Johnny Sexton, 2018 World Rugby Player of the Year. “These stamps are a thank-you to this team of remarkable individuals and to Irish Rugby for all that they mean to Ireland and the Irish everywhere,” An Post Chief Executive David McRedmond said at the August 2019 unveiling.

5. Love and Marriage. Ireland has its own series of love stamps. For this year’s 15th consecutive release, “Love” is superimposed on a shower of hearts, and “gra,” Gaelic for “love,” is in its own heart within the “O.” In 2015, when a closely watched referendum on gay marriage was coming before voters, An Post released what one newspaper drolly observed was an “almost rainbow-coloured” love stamp, going out of its way to advertise it as ideal for “invitations to civil unions.” Three months later, Ireland became the first country in the world to legalize gay marriage by popular vote.